Harmony in the Hills Concert

St. Paul’s is delighted to present Cathedral of Notre Dame, Paris concert organist, Johann Vexo. He has performed extensively throughout Europe, United States, Canada and Russia. Don’t miss the chance to hear him in Rochester.

Johann Vexo was born French city of Nancy–a city close to the borders of Belgium, Luxembourg, and Germany. Surrounded and influenced by the rich musical and cultural heritage of that region of France, Johann’s training and performance career developed so rapidly that at age 25 he was appointed Organiste de Choeur (Choir Organist) at the Cathedral of Notre Dame, Paris. Soon thereafter he was also appointed Organist of the grand Cavaillé-Coll organ of the Cathedral in Nancy most recently Professor of Organ at the Superior Music Academy in Strasbourg. His very physical approach to playing results in wonderfully rhythmic music-making, “the kind you feel as well as hear, and in riveting performances where this is no notion of organ playing as dull or dutiful or pompous.” (Dallas Morning News) 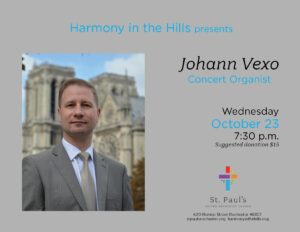